The Thick GEM-like (THGEM) detectors have the same topology as the Gas Electron Multipliers, although their dimensions are 5-20 times larger. Their buildup consists of two layer of metal and an insulator between them. Holes are drilled, in most cases to PCBs about one every square mm. Due to the large electric potential (~1500V) applied to the two metal electrodes yields a huge electric field inside the holes.

This electric field can amplify the signal by ten million. An other advantage of THGEMs is that this amplification is very rapid, about a few nanoseconds. Additionally the spatial resolution of these detectors is about below a millimeter. With an amplification of ten thousand, it is capable of the distinction of ten million particles per square millimeter each second.

Thick GEMs can be used in a wide ranges of gases. A few examples of their usage in particle physics: particle tracking with sub-millimeter spatial resolution, readout of Time Projection Chambers (TPCs), readout of calorimeters, amplification of very fast signals and detection of individual photons (especially Cherenkov photons).

Our research group is working on several R&D projects in order to understand how THGEMs work on a single electron level. One of the currently ongoing investigation includes the examination of THGEM surfaces with single photons. This project is funded by the AIDA-2020 project. 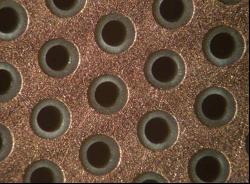