The GEM technology is becoming more popular nowadays among gaseous particle detectors. The basic operation of gaseous detectors is that a particle passing through gas ionizes the gas and we amplify and measure the excited electron. The GEM was born from the consideration to preamplify the signal, however later it turned out that it has other advantages as well (better position resolution, rate-capability etc.). Beyond numerous practical application most commonly used in basic particle physics research, for example in CERN experiments (ALICE, CMS, ATLAS etc.).

The GEM is a thin isolator layer with metal (tipically copper) cover on both sides and the surface has a lot of tiny hole. Between the two metal layer we switch some 100 V high voltage. The electron - excited by the particle we want to measure - will drift to the center of the closest hole. In the middle of the hole the electric field is so high due to the high voltage that a so-called avalanche will be formed, so multiple electrons will exit at the bottom of the GEM. There are ongoing research on experimenting with different geometries (e.g. TGEM), collectively we call them micropattern gaseous detectors (MPGD). 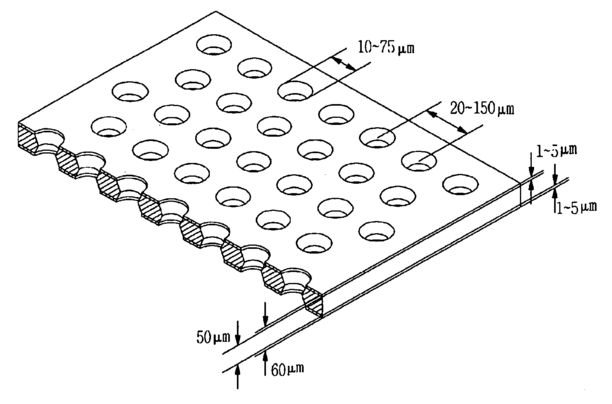